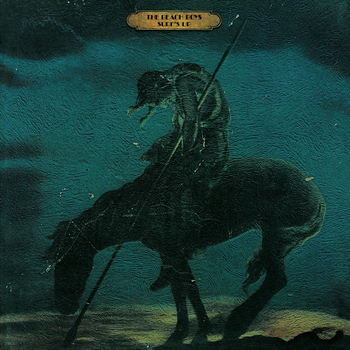 "A choke of grief, heart hardened I / Beyond belief, a broken man too tough to cry..."
Advertisement:

Surf's Up is the seventeenth studio album by The Beach Boys, released in 1971. It is their last album to fully feature Bruce Johnston before his departure (He appeared on one song — "Marcella" — on the following album Carl and the Passions – "So Tough"). Johnston would not return to The Beach Boys until late 1978, and has remained with them since.

The name and cover (as well as the title track) are meant to be ironic, as it couldn't be possibly more different from their early Surf Rock albums. The title track is a leftover from the cancelled Smile.

Speaking of that, "Long Promised Road" and "Feel Flows" are generally considered to be Carl Wilson's greatest achievements (along with "The Trader" from Holland), and "Disney Girls (1957)" is the most acclaimed Bruce Johnston song. Alternatively, for better or worse "Student Demonstration Time" is generally considered (at least by the fan-base) to be one of the worst Beach Boys songs, partly for being a re-write of the Leiber and Stoller classic "Riot in Cell Block #9", and for taking the place of the Dennis Wilson masterpiece "(Wouldn't It Be Nice to) Live Again". That doesn't mean it has no fans; it was a modest success in Australia and the Netherlands when released as a single (and got some radio airplay in America), and is also acclaimed as one of the heaviest Beach Boys songs. "'Til I Die" and "Surf's Up" are also undisputed classics.

Unlike Sunflower, there is a complete absence of songs by Dennis Wilson. "4th of July" and "(Wouldn't It Be Nice to) Live Again" were meant for the album, but Dennis chose to remove it due to a dispute with Carl about the track-listing and which song should end the album. Also, this is the last album where Dennis plays drums (with "Student Demonstration Time" being the last song he plays drums on) before his hand injury prevented him from playing drums for several years. This led to Ricky Fataar (former member of The Flames, future member of The Rutles) joining The Beach Boys shortly after this album was released.

Upon release, Surf's Up became The Beach Boys' best-selling album in years (vastly contrasting from the since-Vindicated by History Sunflower), and was a major critical success from the start.

I'm a trope on the ocean, floating over the raging sea: