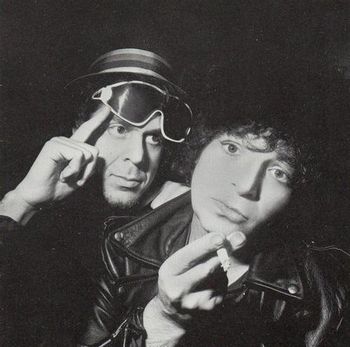 From the name you'd probably assume they're a Heavy Metal bandnote Actually, there is a Turkish Death Metal band by that name. But, in fact, Suicide has been an incredibly influential electronic Punk Rock band. Besides the fact that they were the first to use the phrase "punk music" to advertise one of their concerts way back in 1970, their "synthpunk" style proved to be an enormous influence on Synth-Pop, Techno, Industrial and many other electronics-based styles.

Suicide was formed back in 1970 by artist-turned-vocalist Alan Vega and multi-instrumentalist Martin Rev. After gaining some attention for their confrontational antics in concerts, they finally got around to releasing their first album Suicide in 1977. At this point, their sound was largely defined by Vega's Rockabilly-styled, creepy vocals and Rev's minimal arrangements, which consisted of primitive drum machines and simple, endlessly repetitive keyboard riffs, played initially on a beaten-up Farfisa organ before he could actually afford a synth. During this time they also released a famous live recording, 23 Minutes Over Brussels, which showed a Suicide concert degenerating into a riot.

By the time of their second Self-Titled Album in 1980, they hooked up with Ric Ocasek of The Cars as a Record Producer. Consequently, their second album was slightly more accessible and Synth-Pop-oriented than their nightmarish debut. Afterwards, Suicide lay dormant for a long time as Vega and Rev released solo albums - the most high-profile thing Vega did in this period was to contribute to The Sisterhood's album Gift. During their long hiatus they began to be recognized as an important influence on electronic and Alternative Rock music, and they came together every once in a while to release new albums.

Beside heavily influencing electronic music, Suicide have also had a major influence on various rock artists as varied as Joy Division, Radiohead, and most notably Bruce Springsteen, whose critically acclaimed album Nebraska clearly showed their influence. (Springsteen later covered their "Dream Baby Dream".) And as noted, Ric Ocasek was another fan.

"Rocket rocket USA/Troping on down the highway..."