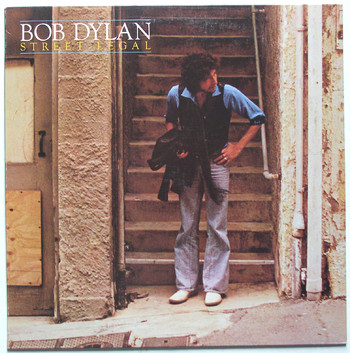 Fortune calls; I stepped forth from the shadows to the marketplace...
Advertisement:

Street-Legal is the eighteenth studio album by Bob Dylan, released in 1978.

The album came at a time of transition for Dylan. He'd just gone through a very public and bitter divorce from Sara Lownds. Also, his film Renaldo and Clara had opened to scathing reviews then quickly closed.

But it also came at a time when the music world was in turmoil. Elvis Presley had died (which deeply affected Dylan). Disco and Arena Rock dominated the charts, and both had their own hedonistic excesses. Meanwhile, Punk Rock was rising up from the underground with its irreverent energy.

All in all, it wasn't a great time to be a 37-year-old rock icon. So how did Bob Dylan handle a Mid-Life Crisis?

By recording an album that was a curious mix of dense, poetic, sometimes cryptic lyrics and slick arrangements, augmenting the usual Dylan sound with saxophone, violin and gospel-style female backing vocalists.

Needless to say, this caught many people off-guard. It became his first studio album of the decade to miss the Top 10 in America (peaking at #11 in Billboard) and drew his harshest reviews since Self Portrait (with that album's main antagonist Greil Marcus leading the way here as well). Interestingly, the reaction in Britain was much different. It was released to rave reviews and got to #2 on the charts, with "Baby, Stop Crying" becoming a hit there as well.

One big criticism at the time was the album's muddy sound. In 1999, producer Don DeVito remixed and remastered it, which started a gradual re-evaluation of the album. It's now appreciated as the last stand of "old Dylan" before his Christian phase. Some go even further and call it his most underrated album. "Señor (Tales of Yankee Power)" was a staple of Dylan's early 2000s concert setlists.