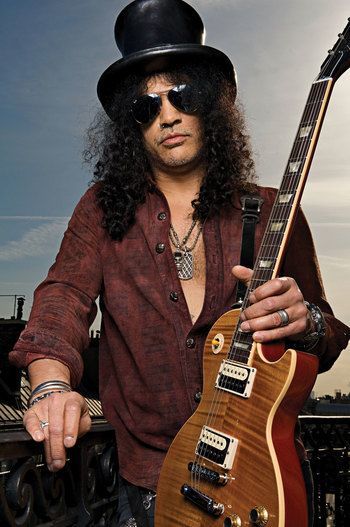 Slash: Rockin' in a nice hat since 1985
Advertisement:

Born Saul Hudson on July 23, 1965 in Hampton, London, England. Considered to be one of the greatest guitarists in the world and his generation's most famous guitarist, Slash is best known as the lead guitarist in Guns N' Roses. After leaving the band in 1996 due to disagreements with Axl Rose, Slash played in the supergroup Velvet Revolver until it disbanded. Since then, he has released three solo albums: Slash, in which he collaborated with a set of guest musicians, and Apocalyptic Love and World on Fire, recorded with his band Myles Kennedy & The Conspirators.

In late 2015, Slash and Axl Rose began talking to each other again, which they hadn't done since Slash left GNR. Soon after, it was announced that Slash and Axl had buried the hatchet and that Slash would rejoin Guns N Roses. After 23 years of absence, Slash was playing in GNR again, and the band soon embarked on the "Not in This Lifetime..." tour.

No relation to the 2002 slasher film.