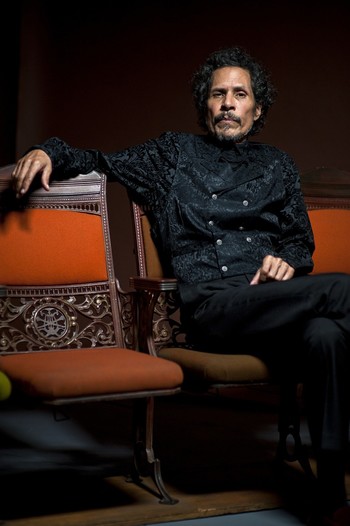 Writer of the 23rd letter of his amorous correspondence
Hello, my love, I heard a kiss from you
Red magic satin playing near, too
All through the morning rain I gaze, the sun doesn't shine
Rainbows and waterfalls run through my mind
- "Strawberry Letter 23"
Advertisement:

Shuggie Otis is an American singer-songwriter and guitarist. Born Johnny Alexander Veliotes, Jr. on November 30, 1953, in Los Angeles, California, Otis' precocious musical talents would appear at an early age with him beginning his professional career around 1965, playing guitar for his father, noted singer, producer and impresario Johnny Otis' band by the age of eleven. His guitar skills were so adept that, during this time, he would have to wear dark glasses and apply black ink between his nose and mouth to imitate a mustache in order to look old enough to perform in clubs after hours with his father.

By 1969, at fifteen years old, he would be asked by Al Looper to play on the second volume of his Super Session series, of which, previously had featured noted guitarists such as Mike Bloomfield and Stephen Stills. Otis would then release his own debut record, Here Comes Shuggie Otis, later that year on Epic Records. This record would further his infamy as a young talent, as he would later play with artists such as Etta James, Eddie Vinson and Frank Zappa, the latter of which he notable played bass on "Peaches en Regalia", a track from his album Hot Rats.

The record that would bring Shuggie the most attention would be his seminal LP, Freedom Flight, which featured a hit in the form of "Strawberry Letter 23", a love song written for his girlfriend who would send him letters using strawberry scented paper. Both the album and single reached the Billboard Top 200 and the Billboard Hot 100, respectively and caught the attention of guitarist George Johnson, one half of the music duo the Brothers Johnson, who then played it for legendary producer Quincy Jones. Who would produce their cover of the song, which instantly became a even bigger hit for them.

In 1974, he would release his first project as an adult and music producer with Inspiration Information, a record that lacked any input from his father and took nearly three years to complete. And although rejected critically and commercially, would garner praise over time and would be re-released on Luaka Bop to great retrospective acclaim. Soon after the record was released, Otis would receive offers from artists as varied as The Rolling Stones and producer of the Johnsons version of his track, Quincy Jones himself, however he would deny nearly all of this offers choosing to play as a session musician on his father's recordings and perform live without recording for over two decades.

Shuggie would come back to touring live in 2013 after a re-release of Inspiration Information with a accompanying compilation of unreleased material titled Wings of Love. And a new, mostly instrumental, album titled Inter-Fusion would be released in April 2018.

Tropes pertaining to Shuggie and his work