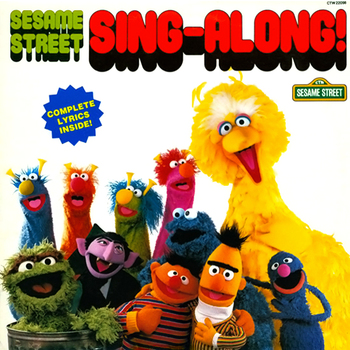 Sing along with your friends of Sesame Street
Sesame Street Sing-Along! is a sequel to the 1975 album Ernie And Bert Sing Along with more popular children's songs. Released originally by Peter Pan Records in 1982 on vinyl and cassette. It was later released by Random House Music and Sony Wonder on cassette and CD. In this album, Ernie and Bert are driving a bus to meet friends (Muppets and Humans) on Sesame Street. After the last track of Side 1, The bus almost ran out of gas. Luckily, There was gas station nearby, And Ernie tells the listeners while they stop by for gas. The listeners at home can turn over the record.

This album provides the example of: