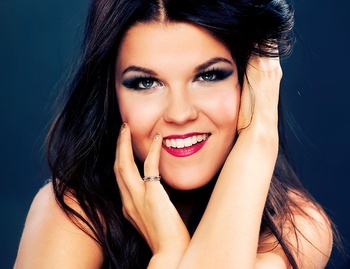 Saara Sofia Aalto (born 2 May 1987) is a Finnish singer-songwriter and voice actress.

After an initial showing on Finland's Got Talent in 2007, Aalto entered public consciousness as a contestant on The Voice of Finland in 2012, where she ultimately finished second. She later competed on the British X Factor in 2016, as one of Sharon Osbourne's Over-25s, and finished there as runner-up as well. Because of her performance in the latter, she was tapped to become a judge on Finland's own version of X Factor in 2018.

After a failed bid to represent Finland at the Eurovision Song Contest in 2016, Aalto was later confirmed to be her country's entrant for the 2018 edition, eschewing the usual competition format of Uuden Musiikin Kilpailu in favor of being internally selected by the Finnish committee. Instead, she performed a selection of three potential songs to be entered at Eurovision, which were then voted on and chosen by the Finnish public: the winning one was the song "Monsters". She flew the Finnish flag in Lisbon, managed to qualify from the semi-final (the first Finnish act to do so since Softengine in 2014) but came in second-to-last place during the grand final.

Aalto is also known for her prolific career as a voice actress, dubbing animated and live-action media for the Finnish audience. Most notably, she's the Finnish voice of Anna in Disney's Frozen franchise, and also voiced the title character of 2010's Alice in Wonderland.