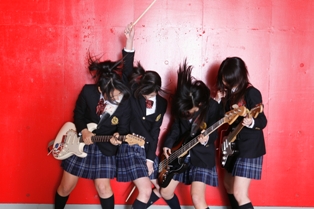 Rocking not only guitars but also knee socks; 2008. 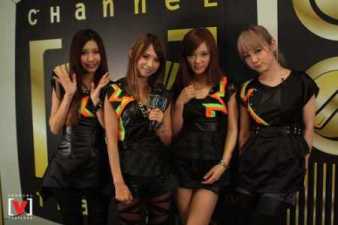 SCANDAL is a Japanese girl band formed in Osaka in 2006 consisting of four students who met at a vocal/dance school. The band is named after a sex shop in Osaka which occupied the same building as a jamming studio where they practiced in their early days. Originally training to be dancers and singers, the girls took up musical instruments on recommendations from teachers. One thing led to another and...

Due to their songs being featured on the various endings of animes and videos games, the band has achieved a somewhat international fanbase and has performed at SXSW, Sakura-Con and AM 2 in the USA, Ani-com in Hong Kong and Japan Expo in France. They have also gone on very successful Asian regional tours almost every year since 2010, and have went even further in 2015 with a 10 concert world tour in 8 countries.

Not to be mistaken for the American New Wave band known for their song "The Warrior".