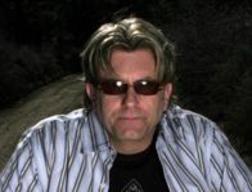 If you watched much TV at all in The '90s, chances are you've heard his music whether you know it or not.

Ronald Aaron Wasserman (born September 2, 1961) got his start at Saban Entertainment developing scores and writing themes for some of their smaller shows, as well as the theme to the animated X-Men series and, more recently, the theme for Nick series The Thundermans. He is best known, however, for composing and performing almost all of the music heard on Mighty Morphin' Power Rangers, most notably the theme song "Go Go Power Rangers"; some of the music from the series was popular enough to actually be released on the album Mighty Morphin Power Rangers The Album: A Rock Adventure.

Doing nearly all the scoring and music duties for three seasons of Power Rangers took its toll, however, and Wasserman left Saban in 1995, citing exhaustion; in the meantime, he and his wife Kathy Fisher started a band (Fisher), a project that has enjoyed a steady stream of success since winning an award in 2000 for "most downloaded song on the Internet".

While Wasserman no longer has any known involvement with Power Rangers, he remains active with other projects, including doing work for Hot in Cleveland.

Out of a desire to refresh the sound of the original Power Rangers songs, Wasserman released Power Rangers Redux on October 22, 2012. While being limited to the music that was commercially released on CD or cassette, a large amount of his previous repitoire still remained to create the album: it's the single largest release of Power Rangers music thus far.

He has also released a couple of original songs for Rock Band, "American Hero" and "Fight Back".

Not to be confused with another Ron Wasserman from New York, this other Wasserman writes and performs classical music.