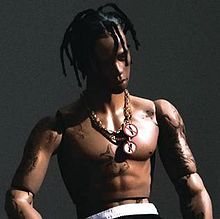 ”Don’t you open up that window,”
Nine light years away, just outside of the Kepler solar system, we find ourselves consumed and utterly mesmerized with a story of a young rebel against the system refusing to conform or comply to the ways of authority. He chose the mood of "Fuck this shit." At that moment, the one known as Jacques turned to Scott, chose to jump off his mama porch, leading the stampede of lost souls in the middle of their metamorphosis, not quite through with their journey. Ain't made it to wherever the fuck they gon' be in life, but wherever it is, it's better than here, so fuck you, and fuck this.
—Opening Narration, courtesy of T.I.

Rodeo is the debut studio album from Travis Scott, released in 2015 to critical acclaim. It is considered widely influential to the Trap Music genre.

Tropes featuring in this album: