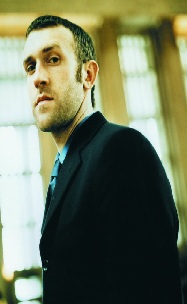 RJD2 (born Ramble John "RJ" Krohn) is a hip-hop DJ, producer, singer, multi-instrumentalist, and songwriter. In the wake of the many, many, many DJ Shadow wannabes that sprang up in the early 2000s, RJD2 stood apart as an original, making innovative and often uptempo instrumental hip-hop tracks with his first two albums (Deadringer and Since We Last Spoke, on Def Jux). And then, cue The Third Hand, on XL Recordings, which sharply split the fanbase into those who liked the sampler virtuoso of the first two albums, and the more indie rock crowd who liked the new singer/songwriter approach. His most recent album The Colossus, released on The Orchard marked yet another departure, into more producer-like territory with a much larger number of guest stars than any previous albums.

Tropes that apply to RJD2 include...