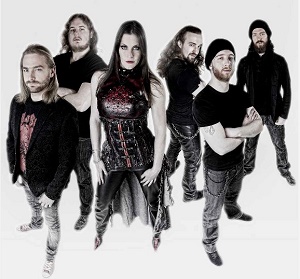 ReVamp was a Dutch Symphonic Gothic Metal band formed by frontwoman Floor Jansen shortly after her former band dissolved in 2009 that disbanded in 2016. After their self-titled album was recorded, Floor suffered a burnout in 2011 due to exhaustive touring, vocal teaching and other duties which took some time to recover from. Shortly after she recovered, she was asked by Nightwish to finish the Imaginaerum World Tour after Anette Olzon left in September 2012, which delayed the release and tours for Revamp's second album, Wild Card, from spring 2013 to fall the same year.

On September 29, 2016, a post was made to the group's official Facebook page informing fans that they had disbanded. The post read "We are sad to inform you that ReVamp has officially stopped. After two great albums it is unfortunately not possible for the founding front lady Floor Jansen to have a band next to Nightwish. Projects perhaps, but a band deserves a 100% devotion which is impossible to deliver to two bands at the same time." Jansen added: "I am proud of the 2 albums we made together! ReVamp has such talented and great musicians that I wouldn’t want them to wait any longer for me to find the time and the passion it needs to make another album. I also don’t want to give fans false hope. ReVamp lived a short and bumpy but exciting life but now it’s time for new bands and projects to start. I thank everyone involved for the love and dedication!"