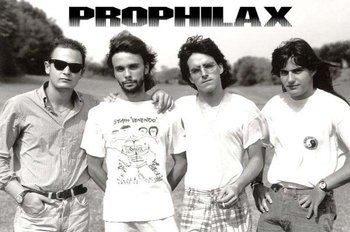 Prophilax is an Italian metal band from Rome, known for its gross, pornographic comedy and critical humor against society, religion and hate in general. Since their debut in 1990 only Fabio Pinci (Known by its nickname Ceppaflex) has remained the only stable member as lead vocalist, while the other instrumentalists changed each year, with exception of maybe guitarist Fabio Piccinini.

In 1992, interestingly, Ceppaflex (under the pseudonym "Cionco Smòla") played as a drummer and vocalist for a side project named Pizza e Fichi called Naka-Gata, that lacked what made Prophilax famous, but nonetheless counts as a piece of history. Their first venture under the name Prophilax was the album Il Signore delle Fogne (The Lord of Sewers) in 1993, which launched many of their most famous songs. Their first misstep is considered to be Under Cool, which was supposed to be their first official album on CD, but had to be delayed till December 1994 because of censorship problems. Their hate of censorship led them to open a website where they put all of their songs for free, including those of their 1996 album Nerkiology (approx. Dikkography), a compilation of all songs from their first demos.

Along with Prophilax, Fabio collaborated to a mysterious group called San Culamo, which members were never identified, a completely different band that instead of being sexual or comical, is a blasphemous act whose songs are filled with swear words, blasphemic boasts and satanist worshipping. Their albums are 1994's Scomunicati e Vincenti (Excommunicated and Winners), 1997's Massacro a Betlemme (Massacre in Bethelem) and 2001's I Predatori dell'Arca Madonna (approx. Raiders of the Gosh Darn It to Heck!).

The band's former sound engineer and webmaster Paolo Bartoli got so obsessed with the band to make material of his own, first by the name 869, then by Paolo Chiavator ("Paolo the Shagger"), directly stealing the nickname of drummer Paolo "Chiavator" Morgantini, and even had his own website attached to the band's. To say the least, his material left much to be desired, and thankfully it was lost in the dark depths of the early Italian internet.

In 2003, Prophilax came back in full force with Il Quinto Escremento (The fifth excrement), with a new power metal/thrash metal sound that doesn't denaturalize their obscene, ludicrous and overall funny nature, followed by Coito Ergo Sum (I fuck, therefore I am) in 2008. As of 2018, there is no new material apart from their 20th anniversary special Vent'anni di Analità (twenty years of anality), and a busy touring schedule throughout most of Italy.