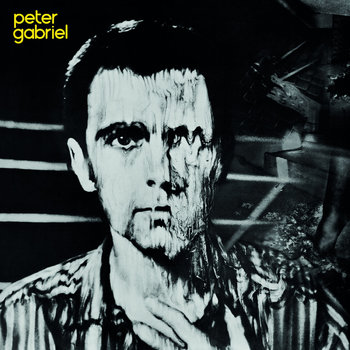 This third Self-Titled Album marks a radical departure in sound, style, and tone from not only Gabriel's previous output, but the direction of western popular music as a whole, combining elements of progressive rock, art rock, Post-Punk, New Wave Music, and World Music in a radically unique manner. In hindsight, the combination was an inevitable one: the practice of mixing western and nonwestern musical styles had been in place since at least the exotica boom of the late 50's, and The Beatles particularly brought it to prominence in white rock with the use of sitar in songs like "Norwegian Wood" and "Tomorrow Never Knows". However, most invocations of this approach were generally regarded by critics and audiences as novelties at best and misguided experiments at worst. Gabriel, meanwhile, was the first act to prove to western listeners that this combination of sounds was more than just a novelty and that it could make artistically compelling music on par with that of already-established western giants, consequently thrusting what would later be known as "worldbeat" into the mainstream.

In the leadup to the album's release, Gabriel had developed an interest in music from sub-Saharan Africa and in new forms of technology that were becoming available to musicians, primarily drum machines and digital samplers like the Fairlight CMI. At the same time, Gabriel found himself still struggling to adequately separate himself from his past as the former frontman of Genesis, with his first two records being closer to continuations of his material with the band than a genuine means of breaking apart as a solo act. Consequently, Gabriel took a far darker, more experimental approach to his third album, crafting an aggressive, cavernous sound with heavy emphasis on percussion. To better consolidate this drastic shift, Gabriel enlisted the help of producer Steve Lillywhite, by then already a known name in the post-punk scene for his work with Siouxsie and the Banshees and the first incarnation of Ultravox. Melding Siouxsie's Gothic atmosphere with Ultravox's leftfield style and Gabriel's knack for general strangeness, Lillywhite worked closely with Gabriel and a large bevy of session musicians, including fellow Genesis alum Phil Collins and young art pop innovator Kate Bush, to bring together an album that was both abrasively dense and forebodingly hollow.

While Gabriel's UK label Charisma didn't raise much of a fuss, the resultant album was the subject of heavy skepticism from Gabriel's US label, Atlantic Records, who were turned off by its heavily experimental sound and misinterpreted its lyrical themes of mental decay as the product of a Creator Breakdown, specifically singling out "Lead a Normal Life", ultimately dropping Gabriel at the recommendation of A&R executive John Kalodner. Incensed, Gabriel quickly signed onto Mercury Records to distribute the album in America, and let the album do the rest: it shot up to the top of the UK Albums Charts, peaked at No. 22 on the Billboard 200, his highest chart placement at that date, and was certified gold by the BPI just three days after its release (later being certified gold in France and the U.S. as well), overall acting as Gabriel's Breakthrough Hit as a solo artist in the UK. Additionally, lead single "Games Without Frontiers" peaked at No. 4 on the UK Singles chart and became the 54th best-selling single of the year in Britain. The song reached a respectable No. 48 on the Billboard Hot 100, but was popular on American rock radio. Billboard wouldn't develop a chart to measure airplay on AOR stations until the following year. Egg on his face, Kalodner, now working for the fledgling Geffen Records, quickly rushed to make amends with Gabriel by signing him on in the US and Canada for 1982's Security and reissuing the album once Mercury's ownership rights lapsed in 1983; Gabriel would remain on Geffen in North America all the way until 2008.

In addition to its commercial success, Melt was rapturously received by critics as well, who praised its adept blend of widely disparate sounds and styles and considered it the definitive sign of Gabriel having finally come into his own as an artist, proving he could make innovative and compelling music both distinct from and outside of Genesis. To this day, it ranks among Security and So as one of Gabriel's best albums by fans and critics alike, with some going as far as calling it his absolute greatest, and universal consensus both in its own time and in the decades since is that it immediately established Gabriel as one of popular music's most ambitious and innovative solo artists since David Bowie. Alongside Talking Heads' Remain in Light later in 1980, this album would instigate a major series of shifts in popular music, making it far more open to influences from non-western music and sparking the worldbeat boom that would reach its peak with So and Paul Simon's Graceland in 1986. Furthermore, while it has its audible predecessors, the opening track "Intruder" is also generally cited as the song that first birthed the gated reverb drum sound that would become omnipresent in popular music for the next 11 years; tellingly, the drummer on that song was Phil Collins, who would bring gated reverb directly into the mainstream with his own "In The Air Tonight" in 1981. As of 2020, the album sits at No. 649 on Acclaimed Music's list of the most critically praised albums of all time.

Most significantly, the album's closing track and third single "Biko" would be credited with sparking western interest in the anti-apartheid movement, raising awareness of the killing of South African black activist Steve Biko by white police officers while in custody, and consequently bringing to the mainstream forefront the true face of apartheid brutality. The song would be cited as a direct source of inspiration by countless anti-apartheid activists in the west, and Gabriel himself would become a prominent figure in the movement.

Melt was supported by four singles: "Games Without Frontiers", "No Self Control", "Biko", and "I Don't Remember."

I trope into the light: