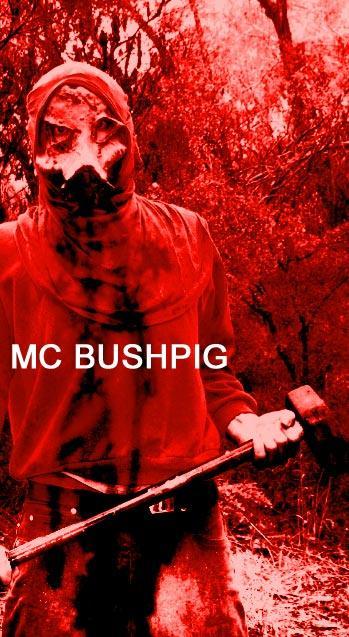 His rap alias. Also frontman of the Butchers' Harem.
Wanking shit for life, even 'till my penis dies
We know what to do, we keep making speedcore from our poo.
When the music's dumb, full of stupid trendy cunts,
We do what we must: We keep wanking shit as hard as fuck.
—"Wanking Shit For Life"
Advertisement:

Passenger of Shit, né Swift Treweeke, is an Australian musician who specializes in speedcore and breakcore. Active since the late '90s, he is one of the most prominent members of the Australian underground, and one of many local musicians specializing in horrorcore, hardcore and noise.

He is known for his unapologetic, everything-in-excess approach to electronic music, which he refers to as "shitcore" or "sadcore." (not that kind

) Ridiculously fast beats, woodchipper-fed breaks, cheesy melodies and bizarre, vulgar lyrics are more or less what can be expected. His bizarre themes carry on to his hip-hop work, as MC Bushpig, and his chaotic, shrieking noise work, foremost as Doodleinacacoon.

He is also a painter, dealing in surrealistic landscapes. Bodily harm, genitalia, and waste are recurring motifs in nearly all his art.

Tropes present in this musician's work: