Music / One Step Beyond 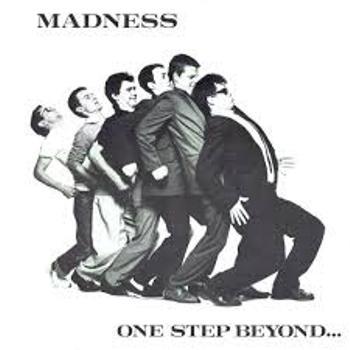 "HEY, YOU! DON'T WATCH THAT, WATCH THIS! THIS IS THE HEAVY, HEAVY MONSTER SOUND, THE NUTTIEST SOUND AROUND! SO IF YOU'VE COME IN OFF THE STREET, AND YOU'RE BEGINNING TO FEEL THE HEAT, WELL, LISTEN BUSTER, YOU BETTER START TO MOVE YOUR FEET! TO THE ROCKINEST, ROCKSTEADY BEAT OF MADNESS! ONE...STEP...BEYOOOOOOOND!!!"
Advertisement:

One Step Beyond... is the 1979 debut album by British Ska band Madness, best known for their hits "One Step Beyond", "The Prince" and "Nightboat To Cairo". Together with The Rise & Fall (1984) it is seen as one of their best. In a case of First Installment Wins, One Step Beyond is still the one that usually represents the group in "best album" polls and even has a book written about it. This is perhaps a little strange, since although there's certainly an almost-universal affection for the LP, few fans or critics actually consider it their best.

Example of:
Spoken Word in Music