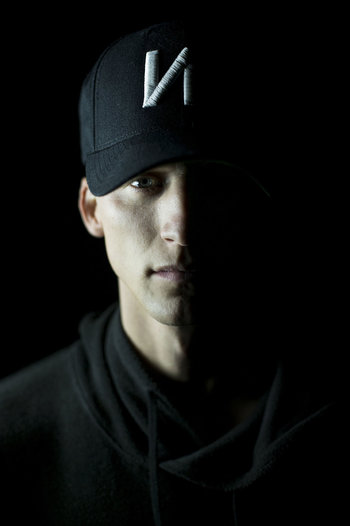 "I'd rather be myself and be hated for it, then be what everyone else loves and hate myself."
— NF Real Music

Nathan John Feurestein, better known by his stage name NF (born March 30, 1991) is an American rapper who has charted in both the Christian hip hop markets and recently the mainstream markets.

Known for filling his lyrics with raw emotion and brutal honesty, NF had a rather dark past and uses his music to tell his stories. He debuted his first album Moments in 2010 under his real name.

Once he started gaining popularity, he started going by NF and introduced his first album Mansion under the name in 2015, earning him the 62nd spot on the Billboard 200. The album gained positive reviews for his songwriting, especially since his content was surprisingly dark for a Christian artist.

His second album Therapy Session was released in 2016 and topped the Rap Albums chart, proving to be not only darker than the first album, but filled with more of the same hard-hitting pathos his songs are known for.

However, his 2017 album Perception has become his most successful EP to date, becoming his first album to top the Billboard 200 and his first album to be certified gold by the Recording Industry Association of America (RIAA), establishing him in the mainstream. His song "Let You Down" from the aforementioned album reached No. 1 on the Mainstream Top 40.