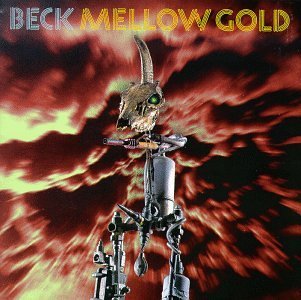 Mellow Gold, released in 1994, is considered to be Beck's official debut album note  technically third, when counting earlier independent albums Golden Feelings and Stereopathic Soulmanure . A record filled with tales of bad jobs, obnoxious neighbors, and strange women, it acts as the beginning of the Genre-Busting style he is most known for. The album (and its leading single "Loser") also marks a turning point in Beck's life, where he went from living in a shed and obscurity to becoming a successful and well-known musician.