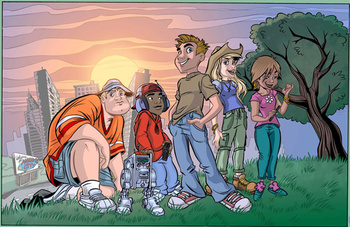 Be a messenger. No cape required.
Mammoth City Messengers was a Christian CD/comic book series launched in late 2003 under the label Forefront Records. It was produced by Matt Bronleewe and Jeremy Bose with illustrations by Tom Bancroft, Rob Corley, Howard Shum, Rob Schwager, and Rich Faber. The project was cancelled in 2004 due to poor sales and promotion. It gained recognition after one of its main voice actors, Hayley Williams of Paramore, became famous. It also features the voices of Jerry Minshall, Pat Reilly, Jennifer Heflin, Mitch Dean, Chance Scoggins, Quinton Caruthers, and Travis Collins.
Advertisement:

The main plot is that five ordinary junior high students, Mason Storm, Taylor Hudsonnote also credited as Taylor Grant, Isabella Ruiz, Deejay Justice (and his robot AXTN), and Junior Kinkaid, are chosen to fight corrupt billionaire Evel Beetle, who plans to take over Mammoth City and the world. The story is told through "scenes", interwoven with songs featuring the kids. Only the first volume (and a preview to the proposed first comic book included in the physical copy) has been released, with volumes two and three never seeing the light of day after the project went under. The official website also contained a "radio series", acting as a prequel to the first CD.