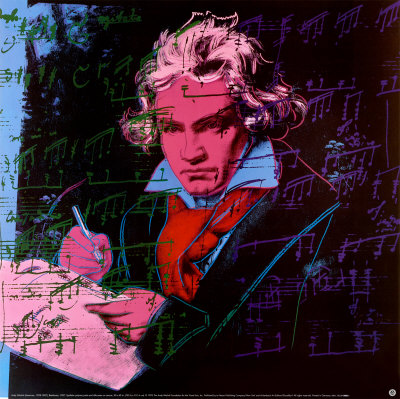 Isn't he a colorful character?
"There are many princes and there will continue to be thousands more, but there is only one Beethoven."
—The man himself.

German composer (c. 17 December 1770 – 26 March 1827) of Classical Music, generally considered one of the most talented and influential of all time.

Born in Bonn to a family of Flemish origin (that's why it's van Beethoven, not von, and he's not a nobleman; the Dutch "van" is no indication of nobility, although Beethoven was known to use the confusion to his social advantage), he moved to Vienna in the 1790s, at first attracting attention for his virtuoso piano performances. His earlier compositions were accomplished but derivative pieces (on the surface, at least) in the Classical Era style of Joseph Haydn and Wolfgang Amadeus Mozart.

Then he started to go deaf, and everything changed. He began to compose dramatic, emotional works on a scale far larger than anything most musicians had worked on before. They eventually laid the foundation for the Romantic Era of music.

Beethoven wrote music in a wide variety of genres, including a single opera, Fidelio. He is most famous, however, for his symphonies. Symphony No. 5 in C minor is filled with spectacular moments. His epic and inspirational Symphony No. 9 in D minor, first performed in 1824 when Beethoven was almost completely deaf, has become one of the world's most famous musical works, eventually becoming the anthem of The European Union. Thanks to Pop-Cultural Osmosis, you probably know the "Ode to Joy" from the fourth movement, even if you've never heard the rest of the symphony.

Throughout the 19th century, Beethoven's works were upheld among even the greatest composers as the impossibly-high standard one should always try to strive to match, even if one could never succeed in doing so. Franz Schubert went into a kind of compositional paralysis after he heard a Beethoven symphony, believing much of his own work was no longer worth pursuing when something that great was out there. Richard Wagner, whose ego was as large as Germany itself and someone who never hesitated to tell everyone how great he was, could only bring himself to proclaim that he was the successor to Beethoven, not Beethoven's equal or better.

Beethoven may have been an alien spy. Or possibly a Time Lord. Or maybe even you!