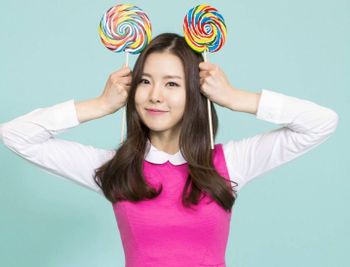 Lim Kim promoting "Are you a Grown Up?"
Advertisement:

Kim Yerim (born January 21, 1994), aka Lim Kim is a Korean Pop Music soloist. She initially came onto the Korean Music scene as a member of a duo called Togeworl, and competed in the show Superstar K3 as such. However, after her companion Do Dae-Yoon had to return to school, Lim Kim made her solo debut in 2013 under Mystic 89. She is known for her distinctive airy voice and for a song style more reminiscent of worldwide Indie songs than traditional K-Pop. She left Mystic 89 on May 30, 2016, and has not yet signed with a new label.

Not to be confused with the American rapper Lil' Kim.

Tropes related to Lim Kim and her music: