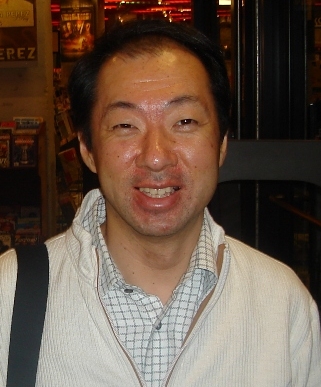 Koji Kondo (born August 13, 1961) is perhaps the most legendary video game music composer, alongside fellow composers Koichi Sugiyama and Nobuo Uematsu. He composed what is perhaps the most well-known video game song of all time, the Super Mario Bros. theme. He has also composed for many other Mario games, along with The Legend of Zelda series, and various other games for Nintendo.
Advertisement:

Among other things, he is known for constantly remaking his old pieces and putting it into newer games, especially in the Mario series. This has made him a somewhat controversial figure among Nintendo fans, dividing them into fans who enjoy the remakes of his old pieces and fans who grow tired of these themes and say he should come up with newer piecesnote  Sometimes ignoring the fact that he mixes his old pieces with newer ones in every game. Nevertheless, he is still renowned as one of the greatest composers in the industry.

Well known examples of his pieces can be found on the Awesome Music pages for Super Mario Bros. and The Legend of Zelda.