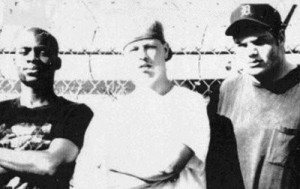 From left to right: ROC (Bryan Jones), Hektik (Paul Methric) and Mr. Bones (Jamie Spaniolo).note You might know the last two better as Monoxide and Jamie Madrox of Twiztid

House of Krazees was a Horrorcore rap group from Detroit. It was founded in 1993 by ROC (Raps On Contact), Mr. Bones and Hektik, who were known for performing in Halloween pumpkin masks in their live performances. They also wore these masks on their album covers. House of Krazees self-distributed their own catalog on cassette via their own label, Retro Horror Muzik, until signing a contract with Latnem Entertainment, which marked the beginning of the end for the group.

While recording for Latnem, the label's owner wasn't properly compensating the group for the music they were recording. House of Krazees would go on tour with Insane Clown Posse, but the original line-up broke up during the tour. Mr. Bones and Hektik signed with Psychopathic Records, renaming themselves Jamie Madrox and Monoxide Child, and jointly calling themselves Twiztid. R.O.C. tried to reboot House of Krazees with another rapper, Skrapz, and these two eventually left Latnem, forming Halfbreed.

The song "Murder, Murder, Murder", commonly considered a Twiztid song, was originally recorded by House of Krazees. When it appeared on Twiztid's debut album, Mostasteless, the R.O.C.'s verse was cut out of the song. Allegedly, there were plans for House of Krazees to have a young Eminem appear on one of their early albums, but these plans fell through. Eminem ended up dissing Twiztid and Insane Clown Posse for different reasons.