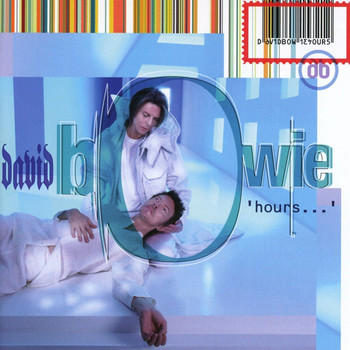 "Lived all our best times, left with the worst."
Advertisement:

'hours...' is the twenty-second studio album by David Bowie, released in 1999. It is notable for being not only his last album with both the EMI sublabel Virgin Records and EMI as a whole (with all following albums being released through Columbia Records), but also the first complete album by a major artist available to download over the Internet, preceding its physical release by two weeks (it wasn't the first music of any kind distributed in this manner, though; that would be Bowie's earlier single "Telling Lies"). Given the comparatively slow state of the dial-up form of internet that was common in the 1990's, Bowie launched his own ISP, BowieNet, the year prior to this album's release partly as a means of giving fans a way to more readily download the album in its entirety.

A major departure from the preceding two albums, being a mix of art rock and pop rock with heavy electronic leanings and a much more Lighter and Softer style both musically and lyrically (save for the Hard Rock-influenced "What's Really Happening" and "The Pretty Things Are Going to Hell"). Its singer-songwriterly feel immediately drew comparisons to Hunky Dory, which was mirrored by Bowie outgrowing his hair in a similiar fashion to how he did back in 1971. All but three songs on the album (the exceptions being "If I'm Dreaming My Life", "What's Really Happening", and "Brilliant Adventure") were both used in and originally recorded for the video game Omikron: The Nomad Soul, essentially making this Bowie's sole foray into VGM. In addition, the song "What's Really Happening?" was also recorded live using lyrics that were submitted as part of a "Cyber Song" fan competition on Bowie's official website, later advertised on the tray art for the album's CD release.

Like its predecessor Earthling, 'hours...' was commercially successful, peaking at No. 5 on the UK albums chart and being certified silver in the UK and gold in France. In the US, it was Bowie's first album since The Rise and Fall of Ziggy Stardust and the Spiders from Mars to miss the Billboard Top 40, peaking at No. 47. The critical reception, however, was a lot more mixed; whilst some appreciated the more mellow direction Bowie took, others cited its' slick, overtly sterile production as the album's main drawback.

The singles released from this album were "Thursday's Child", "The Pretty Things Are Going to Hell". "Survive", and "Seven"

You're still troping, but you don't know why