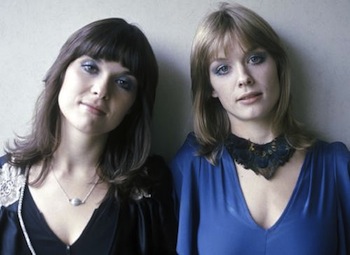 Ann and Nancy Wilson, "Crazy On You" era
These dreams go on when I close my eyes
Every second of the night I live another life
These dreams that sleep when it's cold outside
Every moment I'm awake the further I'm away...
—"These Dreams"
Advertisement:

Heart is a rock band technically formed in Vancouver, Canada but with all its members originating from Seattle, Washington - one of their founding members was dodging the draft, everybody else followed, and later they moved back to Seattle once the whole thing blew over. While previous incarnations date from around 1967, the band itself was led by Ann and Nancy Wilson, who have also remained the only constant members of the band's ever-changing lineups.

To Make a Long Story Short: they first got famous in The '70s, largely by sounding exactly like Led Zeppelin, decreased in popularity by the middle of The '80s but had a comeback in 1985, largely by moving away from Zeppelin-styled rock into Power Ballads and reliance on synthesizers.

The Wilson sisters also played an important part in the Seattle music scene through their ownership of the Bad Animals Studio, used by key Grunge bands such as Alice in Chains, Nirvana, Pearl Jam and Soundgarden and others like Neil Young, Johnny Cash and R.E.M.. Ann Wilson also contributed vocals to the Alice in Chains EP Sap and later appeared at one of their tribute concerts.