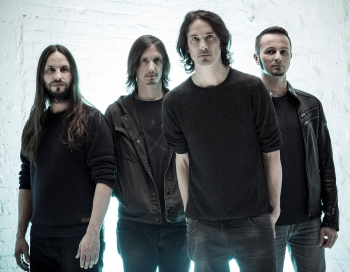 L - R: Christian Andreu, Mario Duplantier, Joe Duplantier, Jean-Michel Labadie
Gojira is a Heavy Metal band from Ondres, south-western France. Originally called "Godzilla", they changed their name to Gojira (which is how his name is read in Japanese) for legal reasons.
Advertisement:

Gojira plays a technical and rhythmic style of heavy metal with precision drumming, unusual rhythm patterns, and start-and-stop riffs. Gojira has also been known to incorporate textured atmospheric elements and instrumental songs into their music, whilst employing progressive and uncommon song structures rather than standard verse, chorus, verse songwriting. The vocal style is varied, ranging from the screamed style often employed in extreme metal, with the death growl style predominantly used in death metal, in addition to clean vocals and higher screams. At times, death metal growls and clean vocals are mixed to create an aggressive but melodic effect. Lyrically, they have a strong environmental theme, centred on man's reckless disregard for nature and its potentially apocalyptic consequences, as well as a rather spiritual approach of death.

Their style has gradually evolved from Technical Death Metal to an increasingly melodic and atmospheric approach, creating their own distinct brand of extreme metal that's pretty hard to classify.

They also delve into political causes outside of their music, such as supporting the NGO Sea Shepherd against whaling or raising funds for the indigenous people of Amazonia; Joe himself is a proud vegan.

The Duplantier brothers also had a more wacky side project called Empalot in the late nineties and early noughties, with Joe singing in French.

Tropes For One Thing: