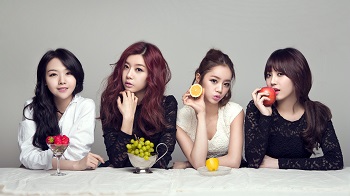 From L-R: Minah, Sojin, Hyeri, Yura
Girl's Day is a 4-member K-Pop group. They were founded in 2010, and to date have released 11 singles, 3 EP's, and one full length album. Their biggest hits are "Expectation," "Female President" and "Something."
Advertisement: