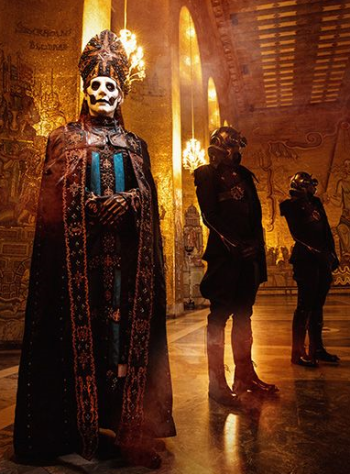 Ghost (known as Ghost B.C. in North America from 2013 to 2015) is a Swedish Hard Rock and Heavy Metal band that combines melodic '70s rock and metal with Satanic themes (imagine a cross between Blue Öyster Cult, Black Sabbath and Mercyful Fate). They are an interesting example of an Anonymous Band: the band members dress all in black, wear masks that completely conceal their faces, and only identify themselves as "Nameless Ghouls"note though they are assigned alchemical symbols for identification, while the singer (Tobias Forge, formerly from Repugnant and Subvision, who was anonymous until a lawsuit forced him to reveal himself) is a succession of Sinister Ministers called Papa Emeritus. The Papa character was seemingly retired in 2018 and replaced by Cardinal Copia, along with the reveal of an elderly Papa called Papa Nihil. However, Nihil "died" in 2020 and Copia became Papa Emeritus IV.

Not to be confused with the disbanded Japanese band Ghost, the Mystery Skulls song of the same name, or the music video based off it.