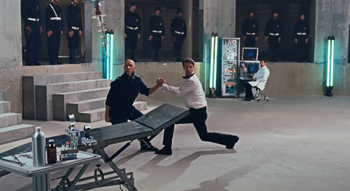 It Makes Sense in Context ...we think.
Advertisement:

written, produced and performed by Swedish indie pop trio Miike Snow and distributed by Atlantic Records. The song is a catchy pop number about jealousy and ambivalence in a romantic relationship. The video, however, is a four-minute homoerotic tribute to Tuxedo and Martini spy movies.

Not to be confused with Dschinghis Khan or the titular Genghis Khan himself.