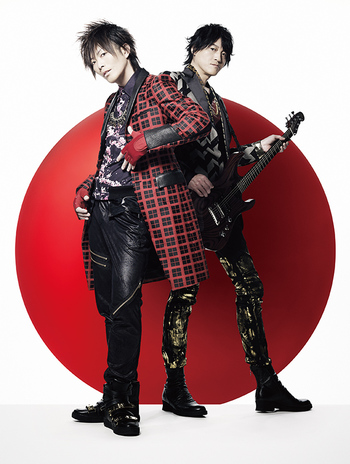 GRANRODEO is a Japanese rock band, specializing in creating anime soundtracks. While focusing on hard rock and heavy metal styles, they have released various types of songs that don't stick to the genre, such as pop, alternative, mixture, melocore, punk, brass rock, AOR, funk, and even folk.

The duo was born in 2005, where musician Masaaki Iizuka (e-ZUKA) wrote a character single for voice actor Kishou Taniyama's (KISHOW) character in Rumbling Hearts. After hitting it off with karaoke, the two then formed the band.

The band is composed of two members only: KISHOW handles almost all lyrics, and e-ZUKA handles all composition and arrangement. However, in live performances, they are supported by drummer Ichiro Nagai (VAL) and bassist Takita Isamu. VAL left in February 2017 and was replaced by SHiN.

Tropes found in their music: