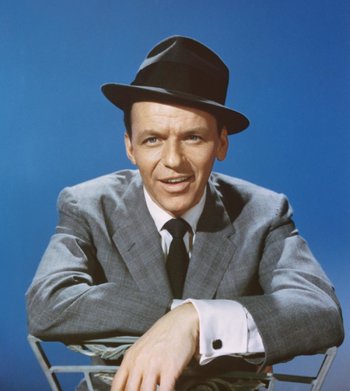 "Ring-a-ding-ding, baby."
"He lives by an ancient code — he's unforgiving of his enemies, protective of his friends."
— Alan King, Name Dropping
Advertisement:

The Chairman of the Board. Ol' Blue Eyes. The Voice. Leader of the Rat Pack.

Francis Albert Sinatra (December 12, 1915 – May 14, 1998) is one of the best-known and best-loved singers in the history of American popular music. His voice is among the most recognizable in the world, and his work has been featured in numerous other media. An overview of his long and storied career would take too much space, so one should look to The Other Wiki's

article on him for that. A child of Italian immigrants and a native son of New Jersey, he's commemorated by his hometown of Hoboken with a large mural covering an entire intersection.

Interestingly, serious historians of music consider Sinatra to be the true inventor of the Concept Album, with 1955's In the Wee Small Hours (it's about men feeling lonely and isolated in, well, the wee small hours of the morning).note Woody Guthrie's Dust Bowl Ballads might also qualify, being as they are all around the central themes of the poverty and hardship suffered by Dust Bowl refugees. There is little debate, however, that In the Wee Small Hours was the first concept album unified by a mood or musical theme rather than a narrative one. He also had a successful career as an actor — two, in fact. First, as the shy, innocent, virginal musical performer who co-starred with Gene Kelly in On the Town and Anchors Aweigh, and then as the cynical, streetwise tough guy in From Here to Eternity (his comeback role, which won him an Oscar for Best Supporting Actor), The Man with the Golden Arm, and The Manchurian Candidate. Speaking of Oscars, he also took home the award for Best Original Song three times (and was nominated for two more).

He's also generally believed to have had strong ties to The Mafia, although it's impossible to say where the truth ends and fantasy begins. One fact most historians agree on is that working in Las Vegas and rubbing elbows with guys named "Bugsy" was a package deal in those days. Plus, he was Italian American and born in North Jersey in 1915; it would have been virtually impossible for him not to have known anyone associated with the Mob. More controversial was his political activism, which branded him a Communist in some circles. It wasn't until he became a registered Republican and sang for President Nixon (largely due to the Kennedy family snubbing him) that those rumors died down and his career revitalized.

Sinatra was decades ahead of the curve regarding race relations. In one case, he forced a hotel to desegregate by announcing that either they would allow Sammy Davis Jr. (and other black people) to stay there, or he and a number of other members of the Rat Pack would not only not stay there, but they also wouldn't perform there either. The pressure applied by him and his fellow Rat Packers were instrumental in causing Las Vegas to become one of the first cities to fully desegregate.

Perhaps one of the first performers to induce loud shrills and fainting in the female population—or, at least, he seemed to. And if some of that was hype, he definitely induced lightheadedness with his generosity — Sinatra was a huge tipper. Huge. His minimum tip was $100 — back in the Fifties. Today, that's like tipping somebody one thousand dollars. Don Rickles once said, "If you got Sinatra's table, you were buying real estate in Paris the next day." The story goes, he asks the kid who brings his car around outside the restaurant what's the biggest tip he ever got. Kid says $100. Sinatra gives him $200, then asks who gave him the $100 tip. "You did, sir, last week."

Tropes invoked by him:

I said all, nothin' at all
If it's love, there ain't no in-between
Why begin then cry for somethin' that might have been
No I'd rather, rather have nothin' at all