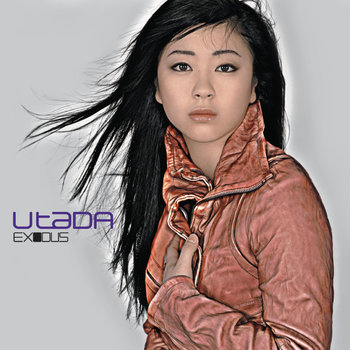 My baby, don't you know I'll never let you down?

Exodus is the second English-language studio album by Utada Hikaru, released on September 8, 2004 under the mononym Utada. Though this is her second album in English, it is typically seen as her Western debut, as her previous album, Precious (released under the Stage Name Cubic U) was not released in English-language markets due to Capitol Records restructuring at the time.

Following the release of three massively successful and acclaimed Japanese albums, First Love, Distance and Deep River, Utada felt she had exhausted her creative energy and was unsure of what to do next in her career when she was approached by Island Records to debut with an English-language album in the US. She agreed, feeling that a recording in a different language could provide her with new inspiration for music.

Utada produced almost all of the album by herself, in what she described as a "very intense, introverted process", resulting in a dramatically different sound from her previous work. Though she had already begun to branch away from R&B music and experiment with different genres with Deep River, Exodus sees a major Genre Shift to experimental electronica music, with hip-hop, R&B, rock and world music influences. Lyrically, the album deals with relationships, communication and self-reflection, and is notable for having much more sexual content than her previous work. Utada also addresses her Japanese heritage on certain tracks, with lyrics that raised eyebrows among some listeners.

Though Exodus was intended to make Utada a crossover star, the album was commercially unsuccessful in Western markets. Despite positive reviews, the album peaked at #160 on the Billboard 200 and sold about 55,000 copies. Unlike previous crossover attempts by Japanese artists, Utada's English ability was not an issue; however, its left-of-centre style, lack of promotion by Island, and Western prejudice against East Asian artists are all cited as possible reasons for its failure. In Japan, the album was much more successful, debuting at #1 and selling over 1 million copies, though this was also an underperformance compared to the monumental success of her first three albums.

Four singles were released from the album: "Easy Breezy

". None of them received significant attention in the West, though "Easy Breezy" was a hit in Japan and "Devil Inside" became a #1 hit on the US dance charts.

I still remember the ways that you troped me...