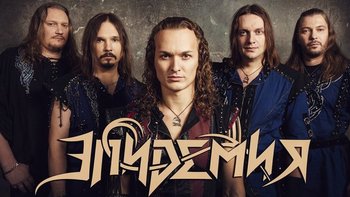 Epidemia (Эпидемия) is a Russian Power Metal band, formed in 1993. Their name means "Epidemic" in Russian, but their songs are mostly Heavy Mithril, set either in Middle-earth, or their own Standard Fantasy Setting.

Main gimmick of the band lies in their "metal opera", set in said fantasy setting. So far four of their studio albums were part of this story. Epidemia also sometimes carries out theatrical performances of this opera, complete with several guest vocalists.