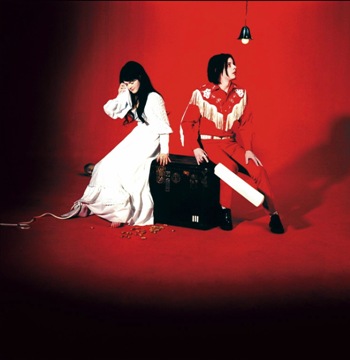 Elephant is a 2003 album by The White Stripes. It's their fourth record and also their most acclaimed album, most notable for the hit singles "Seven Nation Army" (which won a Grammy Award for Best Rock Song and received massive airplay) and "The Hardest Button To Button".

For the recording, Jack White primarily used vintage, 1960s stereo equipment and completely dissociated himself and Meg from contemporary music during the songwriting process. He captured Blues, Folk Rock, and even some Punk Rock influences throughout the album. The album featured Jack White's signature Three Chords and the Truth style, but also more intricate instrumentality in tracks such as "The Air Near My Fingers" and "There's No Home For You Here". Word of God maintains that it's also a loose Concept Album revolving around the death of a so-called American sweetheart, with themes surrounding relationships, depression, and modern life.

Well, it's true that we trope one another: