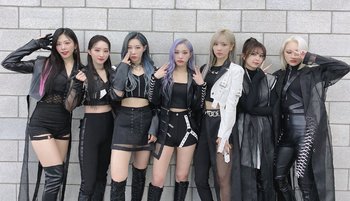 "Dream of me~ Hello, we are Dreamcatcher!"

Dreamcatcher (Hangul: 드림캐쳐, also known as Dream Catcher or DreamCatcher) is a seven member Korean Pop Music group that debuted in 2017. JiU, SuA, Siyeon, Yoohyeon and Dami had originally debuted in 2014 as MINX (Hangul: 밍스), but after the group failed to get any significant success, their company (Happy Face Entertainment) unofficially disbanded them and reformed the group into Dreamcatcher, adding Gahyeon and Handong. The group released their first single "Chase Me" on January 13, 2017, and immediately garnered lots of interest due to their Darker and Edgier concept, powerful and intricate dances, and rock/metal inspired sound.