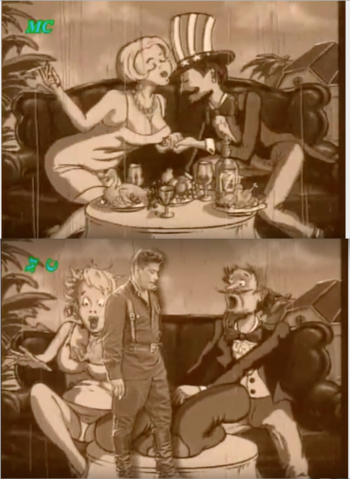 We don't want any Valenki! We don't even know what it is!
Don't Play the Fool, America! (Russian: Не Валяй Дурака, Америка!) is a music video released by Russian rock band Lyube in 1992, shortly after the collapse of the Soviet Union and the Cold War. note  The USSR was still alive and operational during the filming of this video in 1991. It's a satirical play on anti-American propaganda (without literally being one itself) that cries for the return of Alaska to Russia along with some decries of American culture. It utilizes some of the most sophisticated computer animation and hand-drawn animation utilized by Russia at the time, though the United States had accomplished these feats long before Russia had. The lead singer is Nikolay Rastorguev, a controversial musician blacklisted and banned from Ukraine for attacking said country, who provides most of the singing as he does with most of the band's music.
Advertisement:

This video is not banned from the United States, but unsurprisingly did not get any major broadcasting deals in American media either. This is considered Lyube's Signature Song since it's their best recognized and most acclaimed song in Russia.

Tropes associated with both the song and music video (sharing the same name):