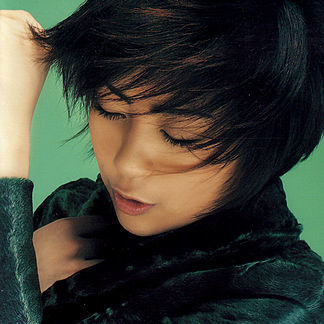 I wanna be with you now...
Advertisement:

Distance is the 2nd Japanese studio album by Utada Hikaru, released in 2001. Following her debut album, First Love, which became the best-selling album in Japanese history, Distance was a similarly massive success, becoming the 4th highest-selling Japanese album of all time and 2nd highest-selling original album, with over 4.5 million copies sold in Japan. This solidified her position as one of the most successful and influential artists in Japanese music history.

Like its predecessor, Distance is an R&B-pop album, influenced by American R&B, hip-hop and soul music. From a production standpoint, the American influence is arguably greater than on First Love, as Utada collaborated with US producers like Jimmy Jam & Terry Lewis and Rodney "Darkchild" Jerkins on some of the tracks. The album also shows more incorporation of rock influence on tracks like "Drama" and "Kettobase!". This was also the first album where Utada was involved in the arrangements for some of the tracks.

The album is also notable for selling a whopping 3 million copies in its first week, making it the fastest-selling album in Japanese music history. It also held the global record for fastest-selling album of all time for 14 years before being surpassed by Adele's 25 in 2015. This was in part due to its release date, which it shared with the fellow J-pop superstar Ayumi Hamasaki's first compilation album A BEST, attracting media attention and fuelling speculations of rivalry between the two singers, which they both denied. Regardless, there was a perceived "competition" to see which album would outsell the other, and Distance won, outselling A BEST in its first week and overall. note (Though to be clear, both albums sold a lot - A BEST is #6 on Japan's all-time bestseller list.)

Four singles were released from the album: "Addicted to You"

and "Can You Keep a Secret?"

. All 4 reached #1 on the charts and were massive hits, with "Can You Keep a Secret?" becoming the #1 single of the year for 2001. The album track "Distance" was going to be released as a single following the album's release, but these plans were changed after the Osaka school massacre

in June of that year. In commemoration of one of the victims - a fan of Utada who had written an essay about wanting to become like her - the song was re-recorded as a sombre ballad and released under the name "Final Distance". This new version later appeared on her following album, Deep River.

Not to be confused with the 2018 racing game or the Gaia Online roleplay of the same name.

You said my tropes don't mean a thing...