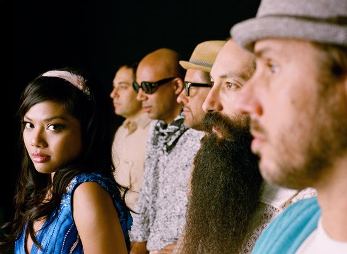 In 2001, the two brothers Zac and Ethan Holtzman took a trip to Cambodia, where they were struck by the local music scene. Upon their return to the US, they started a band with recently-arrived Cambodian singer Chhom Nimol as lead vocalist. Paul Smith joined as drummer, David Ralicke on brass instruments, and Senon Williams as bassist.

Their first album, the self-titled Dengue Fever, released in 2003, was sung entirely in Khmer and included several covers of 1960s Cambodian rock hits.

In 2005, the band went on a tour in Cambodia, which was recorded in the documentary Sleepwalking Through the Mekong. The transformational experience provided inspiration for their following albums, Dengue Fever EP, Escape from Dragon House, Sip Off the Mekong and Venus on Earth. A new album, Cannibal Courtship, was released in 2011.

Music from the band has been featured in the soundtracks of the series Weeds, True Blood and Sanchez Get High, as well as the films City of Ghosts and Broken Flowers.