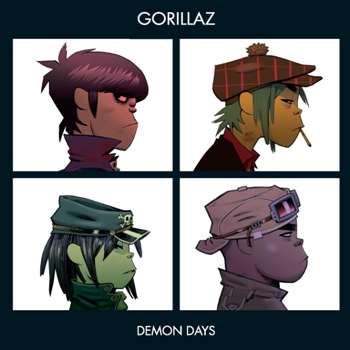 Demon Days is the second album by the virtual rock band Gorillaz, released in 2005.

It was a considerable New Sound Album with more emphasis on pop music, which resulted in more hits than their previous album. The art style and packaging were also upgraded, with Noodle being re-modeled as an older teenager with a less stereotypically Asian caricatured face.

“Dare”, “Feel Good Inc.” and “Dirty Harry” were released as singles, each respectively reaching #1, #2, and #6 on the UK Singles charts, with “Feel Good Inc.” going on to become not only one of the band’s Signature Songs, but one of the most popular songs of the 2000s.

Tropes Coming Out of the Monkey's Head: