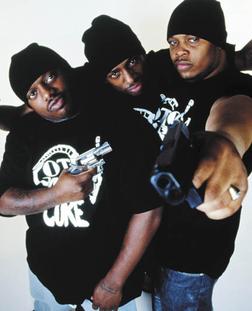 A hard-hitting, uncompromising, gritty, no-nonsense Hardcore Hip Hop group from Flint, Michigan. Unlike other rappers (who tell glorious, romanticized, action movie gangsta rap tales) Dayton's stories was far more grounded, realistic, depressing and bleak. Like their debut album there's no glamorous stories about being rich and affluent. Its strictly about "the struggle" of living in Flint Michigan. A place that's lost all economic hope, devoid of glam or spotlight. The sorrow, the frustration, the poverty, the ghetto desperation, the hopelessness of living in a rundown industrial town just pours out of their souls and into their lyrics. The group has an idiosyncratic identity and a dark, grim mentality focused on modest survival rather than riches or fame. Plus, they're extremely aggressive rappers. they'd be tagged as hardcore regardless of their lyrical content. This is the definition of "reality rap". pure...raw...and uncut.

The group's music contains these tropes