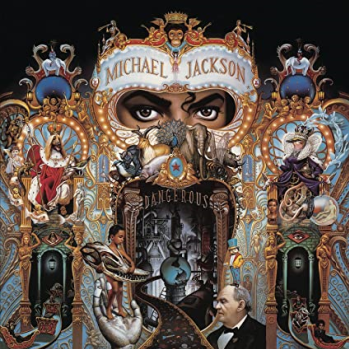 Just promise me whatever we say
Or whatever we do to each other
For now we will be making a vow, to just
Keep it in the closet
"In the Closet"
Advertisement:

Dangerous is the eighth studio album recorded by Michael Jackson. It was released through Epic Records on November 26, 1991.

In 1989, Jackson had begun work on a Greatest Hits Album called Decade, which would've spanned his entire solo career on Epic at the time, in addition to some brand new tracks. But after several delays, and recording an overabundance of new songs for the compilation, Jackson decided to scrap it, and record a new studio album instead. He wouldn't revisit the compilation idea until six years later.

For the first time since the 1975 album Forever, Michael, Quincy Jones was not the producer; instead that function was jointly held by Teddy Riley, Bill Bottrell, Bruce Swedien, and Jackson himself. Riley's involvement came at the recommendation of both Quincy and Heavy D, both of whom had worked with Teddy prior to Dangerous. This, of course, meant the album would have Michael jump head-first into Riley's New Jack Swing genre. Several of its songs, including "Remember the Time", "Jam", and "In the Closet", would be rich with its influence.

This album was yet another monster hit. It went eight-times Platinum in the United States, and ten-times Platinum in the United Kingdom. When all was said and done, it sold 33 million copies. It finished #2 on the Billboard Top 200 year-end chart for 1992, and was still in the upper half of the chart in 1993. It would finish as the 44th best-selling album of The '90s in the U.S.

The album spawned nine singles: "Black or White", "Remember the Time", "In the Closet", "Jam", "Who Is It", "Heal the World", "Give In to Me", "Will You Be There", and "Gone Too Soon". Four would reach the Top Ten of the Billboard Hot 100, though only "Black or White" would hit #1. Seven would be Top Ten in the United Kingdom.

"Will You Be There" was also included in the soundtrack of the 1993 film Free Willy.

It turned out to be Jackson's last blockbuster. Early in 1992, Dangerous was unexpectedly and symbolically knocked off the #1 position on the Billboard 200 album sales chart by Nirvana's Nevermind, suggesting that The '80s' focus on internationally famous mega-acts was at an end.

"Why You Wanna Trope On Me?"