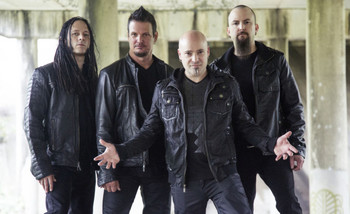 L-R: Moyer, Donegan, Draiman, Wengren.
"Everyone has a struggle in life, and the question is do you allow yourself to be overcome by it or do you master it with unified strength and power.
This is exactly what the music was meant to do, to transcend your normal world, to make you more than what you are, to make you set down your burden for a while.
Feel powerful, feel invincible, feel indestructible; believe' in something as opposed to believing in nothing; spread 'the sickness, infect the world."
— David Draiman, opening line to D.O.D.

Disturbed is a four-piece Chicago Alternative Heavy Metal/Hard Rock band formed in August 1996. Released in 2000, their debut album The Sickness both shot them into stardom and earned them a devoted fanbase called the Disturbed1s. The band made a name for themselves after playing second stage of the Ozzfest tour in 2000, headlining the U.S tour in 2001 alongside the likes of Slipknot, Linkin Park and Marilyn Manson, and then again as a headliner in 2003. In 2001, they created their own tour (a small event at the time), the Music as a Weapon tour taken from a lyric in the song Droppin' Plates (abbreviated as MAAW), including acts throughout its existence such as Drowning Pool, Alter Bridge, As I Lay Dying, Chevelle, Flyleaf, Chimaira, Trivium, P.O.D., Nonpoint, Stone Sour, Lacuna Coil, In This Moment and Killswitch Engage. On September 17, 2002, they released their second album, Believe, which went straight to #1 (see below) and was lauded by critics as the album that broke them from the Nu Metal tag that plagued The Sickness. Years later in 2006, the single Down with the Sickness would be certified Gold, then Platinum in 2009.

After MAAW II's last show in Chicago, they fired bassist Steve 'Fuzz' Kmak for "personal differences" that they've yet to fully explain. He was replaced with current bassist John Moyer, formerly of the Texas Industrial act The Union Underground, who played bass for the album Ten Thousand Fists, becoming a full member during the band's subsequent tour in support of the album. The Ten Thousand Fists album also marked the band's second straight-to-#1 with the song Stricken becoming their second Gold single in 2008. Released on June 3, 2008, Their fourth album Indestructible debuted at #1, was fully self-produced, and won them their first Grammy nomination for Inside The Fire (which became their third Gold single). During the Indestructible tour, Disturbed participated in the first ever Mayhem festival alongside Slipknot, Dragonforce and Mastodon, going on to become one of the largest metal festivals in the United States. This tour also marked the most elaborate production quality and sheer scale and that the Music as a Weapon tour had ever seen, leading them to rechristen it the "Music as a Weapon festival".

The band's fifth effort, Asylum, which the band has touted their strongest body of work yet, was released on August 31, 2010, giving the band some of the best critical approval they've ever seen. Recently the band (or their manager) has become obsessed with festival appearances, playing the Uproar tour with Avenged Sevenfold, going straight to Taste of Chaos with Papa Roach and Buckcherry afterwards, has embarked on their MAAW Fest V with Korn, then it's off to their second Mayhem fest appearance with Godsmack and Megadeth, which still doesn't account for one-day events.note Rock on the Range, Rock am Ring, Download fest, etc After playing Mayhem and four dates in South America, the band will be taking an extended hiatus, with no continuation of band activities projected anywhere in the near future. On November 8, shortly after announcing the hiatus, the band released The Lost Children, a compilation of their all the non-album material written over the course of their career.

In 2012-13, during the course of their hiatus, Moyer joined Super Group Adrenaline Mob, Draiman started an Industrial Metal project known as Device with song-writing handled by himself and Geno Lenardo of Filter, and Donegan started writing with Dan Chandler of Evans Blue, culminating in Fight or Flight, which he invited Wengren to drum for.

On June 20th 2015 a video was posted on their official Facebook page, showing the Guy in cryosleep. Over the next two days, two more videos were released showing him waking up, culminating in him sitting upright and grinning to the camera. On June 23rd, the band announced their new album - Immortalized, set for release August 21st 2015; officially ending the hiatus. Almost 3 years later, the band revealed their next iteration, appropriately titled Evolution, with the single "Are You Ready?", with an album release in October 2018.

Don't expect to nail down their actual genre very easily, as debates continue to this day — they're generally seen as "something heavy metal and probably some hard rock." You can blame the ambiguity on their Alternative Metal tendencies. Try not to mention them and "nu metal" in the same sentence at any point to anyone — it isn't worth it. For all intents and purposes, they're a rock group.

To the group's credit, they're one of the few bands in history to release five straight-to-#1 albumsnote This entails releasing an album which sells enough copies in its first week to debut at the #1 spot. in a row on the Billboard 200 (Believe, Ten Thousand Fists, Indestructible, Asylum, Immortalized), the others being Dave Matthews Band (at six releases since Before These Crowded Streets) and Metallica (everything after The Black Album, making for five). These groups have yet to release an album that breaks this streak, giving them a chance to push the envelope further. Disturbed also happen to be the youngest band to do this. In other words, don't underestimate the Disturbed1s.

Not to be confused with The Mentally Disturbed or Disturbed Doves.

Tropes With The Sickness: