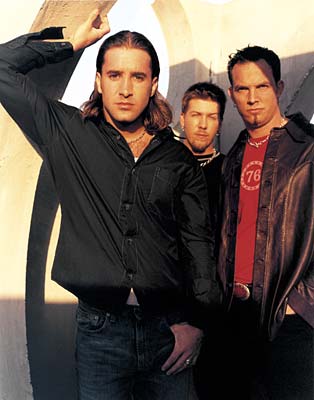 Creed was an extremely popular Post-Grunge band that sold a lot of music in the late '90s to early 2000s. Chances are, if you were between 12 and 20 during this time, you owned one of their albums. They formed in Florida around '95 and released their first album, My Own Prison, in '97. Two years later, they dropped Human Clay and you couldn't turn on a radio in America without hearing "Higher"

Over the next few years, Scott Stapp let fame go to his head and got loopier and loopier in terms of antics. They split not long after Weathered, their last album for 8 years.

3/4ths of the band would go on to form Alter Bridge, a much more embraced rock act. Stapp did a solo album and got in trouble with the cops before dropping off of the face of the earth for a while.

They reunited in 2009 and, surprisingly enough, still sounded pretty good

. They did a short tour followed by a brand, spankin' new album that some music critics said heralded the end times, before going on indefinite hiatus.