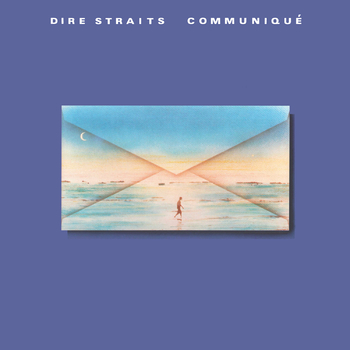 "She's just lying there in silent pain."
"Where will you be when your Communiqué arrives?"
—Tagline from the album's advertising campaign.
Advertisement:

Communiqué, released in 1979, is the second studio album by English roots rock group Dire Straits. Recorded just after the end of the supporting tour for their debut album, this follow-up sees the band continue the blues-inspired, rural-sounding style of music that characterized its predecessor, but orients it in a more laid back and contemplative direction. The lyricism in particular sees a noticeable shift in style, with more ironic portraits of its characters and settings that would grow in prominence on the band's later material. The record was notably the last to feature the involvement of frontman Mark Knopfler's brother, David, who would quit the band during sessions for their next album due to Creative Differences with Mark.

Communiqué was supported by one single: "Lady Writer".

She thinks she's tough— she ain't no English trope: