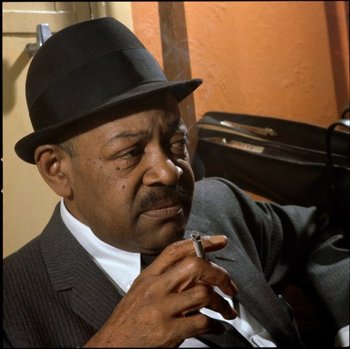 The Hawk, resting.
"When I heard Hawk, I learned to play ballads."
-Miles Davis
Advertisement:

Coleman Hawkins was a jazz musician active throughout the mid twentieth century. Called the "father of tenor sax", he was a pioneer of the instrument playing complex harmonies and charming warm ballads, both considered precursor to the bebop genre. He would play with Fletcher Henderson's orchestra until 1934, where he was a partner of Louis Armstrong. In the mid-thirties, he went to Europe and played with many European jazz musicians, for example, Django Reinhardt and Benny Carter. In 1939, he returned to the USA and made his classic recording of "Body and Soul" after which, he would form his own big band the following year. He was in activity until his death in 1969.

He would inspire many with his style, including future horn players such as Lester Young, Ike Quebec and Miles Davis, whose influence is marked by the page's above quote.