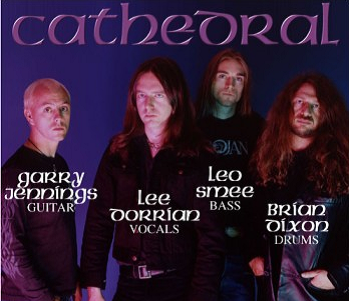 Cathedral is a Doom Metal band from Coventry, England formed in 1989, and disbanded in 2013. They are credited with blending doom metal with the darker aesthetics of extreme metal, culminating in a very slow, very heavy sound with . In the mid-90s, they soon lightened up into a more groove-oriented, stoner rock sound. Frontman Lee Dorrian (Formerly of Napalm Death) has since gone on to form With the Dead with Tim Bagshaw and Mark Greening (both ex-Electric Wizard), which is roughly the spiritual successor.
Advertisement:

Unrelated to the 1986 PBS documentary, or a 2019 Metroidvania of the same name. It is also unconnected to The Cathedral, a 2002 sci-fi animation from Poland.