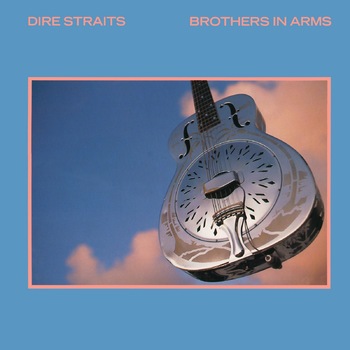 I want my MTV...
Advertisement:

Brothers in Arms is the fifth studio album by Dire Straits, released in 1985. It became a massive million seller thanks to the title track, "Walk of Life", "Your Latest Trick" and the song "Money for Nothing", which was noted for its criticism of MTV. It's one of the biggest-selling albums of all time and was one of the first albums by a major act to be released on CD concurrently with the LP release (barring indie titles, most CD releases early in the format's life were of albums that had already been out for at least a couple years).

In fact, its CD release is notable as the album was specifically designed to take advantage of the format's strengths compared to the then-well-established gramophone record: not only was every song recorded digitally, but the fact that the majority of the tracks were Epic Rocking meant that it was impossible to fit the full album onto a single record. Indeed, up until 2006, all vinyl releases of Brothers in Arms cut a few minutes off of most of the songs (this only changed when Vertigo Records realized they could just release the uncut version as a double LP, but at the time of its original release, double albums were considered commercially unviable in the wake of the relative underperformance of Fleetwood Mac's Tusk compared to Rumours).

This gimmick paid off quite well for Dire Straits, with the album becoming the first to sell more copies on CD than on vinyl, making it one of two major killer apps for the CD format (the other being a reissue of Pink Floyd's The Dark Side of the Moon). It helps that the album came out just as CD players were dropping dramatically in price since their introduction three years earlier, becoming affordable for the average rock fan. Beyond that, the album was a gargantuan commercial success overall, topping the charts in the UK, the US, Australia, Austria, Canada, the Netherlands, Germany, New Zealand, Norway, Spain, Sweden, and Switzerland, and going on to become the best-selling album of 1985 in the UK and Australia. The album would also be certified diamond in Canada & France and platinum in a hell of a lot of other places a hell of a lot of times: twenty-four-fold in New Zealand, seventeen-fold in Australia, fourteen-fold in the UK, nine-fold in the US, six-fold in Switzerland, five-fold in Denmark, four-fold in Austria, three-fold in Spain, two-fold in Finland, and one-fold in Germany, Hong Kong, Italy, and Switzerland. It also went gold in Argentina, Poland, and Sweden.

Regarding the musical content itself, the album is both a New Sound Album and a Revisiting the Roots approach, returning to the band's roots rock sound following the Progressive Rock-oriented Love Over Gold, while simultaneously continuing that album's musical experimentation and incorporation of synthesizers for atmospheric effect (albeit oriented in a far more commercially accessible direction). As with Talking Heads' Little Creatures released the same year, the album would herald a trend toward "rootsy" musical textures in popular music during the second half of the 1980s, embodied by the resonator guitar on the cover. Combined with the continued presence of Epic Rocking, the end result is a sonic middle ground between the nostalgic minimalism of the band's first three albums and the musical innovation of Love Over Gold.

This album was subject of an episode in the TV documentary series Classic Albums and is also the Trope Namer for Money for Nothing.

Track 2 is the Trope Namer for the video game trope Money for Nothing.

"Here come Johnny, gonna tell ya the story, hand me down my walking tropes":