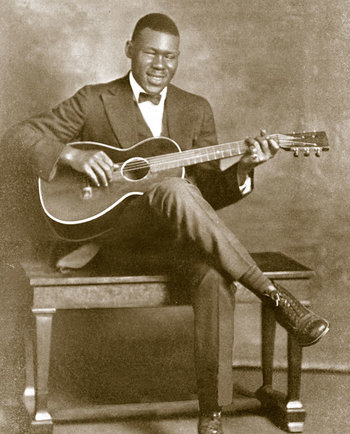 The only known photograph of Blake

Little is known of Blake's life. Promotional materials from Paramount Records indicate he was born blind and give his birthplace as Jacksonville, Florida, and it seems that he lived there during various periods. Other documents such as his death certificate states he was born in 1896 in Newport News, Virginia. However, nothing would be set in stone about Blake until the 1920s, when he emerged as a recording artist.

One of the most accomplished guitarists of his genre, he was known for his distinguished guitar playing, which was and is often compared in sound and style to ragtime piano and his warm, relaxed voice which was considered dissonant to the music he played. He would record about 80 tracks for Paramount Records between the late 20s and early 30s most of which would be compiled into various compilations.

Although the records sold well, the ending of his recording career with Paramount would be marked by their bankruptcy in 1932 and would soon die of uncertain circumstancesnote It was rumoured he died a violent death by either getting hit by a streetcar (purported by Reverend Gary Davis) or freezing to death in Chicago after a drunken stupor. Dutch blues researcher Alex van der Tuuk gave the most concise death report with suggesting he died of a pulmonary hemorrhage, after previously being hospitalized for a case of pneumonia in 1934.

Although living a relatively short life shrouded in misconceptions. His music would go on to influence various other blues and blues-inspired artists such as Reverend Gary Davis, John Fahey and Bob Dylan who notably covered his song "You Gonna Quit Me Blues" on his 1992 record, Good as I Been to You.