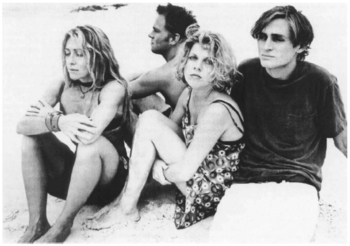 Belly is an Alternative Rock band from Rhode Island that was most popular in the mid-1990s.

Belly was founded by singer-songwriter Tanya Donelly. Donelly was a founding member of the band Throwing Muses, along with her step-sister Kristin Hersh. Donelly was called "the George Harrison of Throwing Muses" due to her role of playing lead guitar but only writing/singing one or two songs per album. After The Real Ramona, fourth album by Throwing Muses, Donelly left the band. She was a founding member of The Breeders along with Kim Deal, playing on the Breeders' debut album Pod and their follow-up EP Safari. Instead of sticking with The Breeders, however, Donelly elected to form her own band.

The original lineup for Belly featured Donelly on guitar and lead vocals, with Thomas Gorman on guitar, Chris Gorman on drums, and Fred Abong (the bassist on Throwing Muses' The Real Ramona) on bass. Donelly wrote all the music, which had the light, poppy sound associated with her Throwing Muses work (as opposed to the more hard-edged compositions of Kristin Hersh). Debut album Star was released in January 1993. The album became a hit, going gold in the United States. "Feed the Tree" became a breakout hit, rising to #1 on the Modern Rock charts and getting heavy airplay on MTV and alternative radio. In 1993 Belly toured with Radiohead and The Cranberries.

Fred Abong left the group after the recording of Star and was replaced with Gail Greenwood. Greenwood's more assertive bass style led to the band adopting a harder, more electric rock sound for their follow-up album King (1995). This may or may not have been the reason why King sold less than half as many copies as did Star. Singles "Now They'll Sleep", "Super-Connected", and "Seal My Fate" did not chart as well as did Star singles "Feed the Tree" and "Gepetto". Belly toured with Catherine Wheel and emerging pop star Jewel, but commercial success proved elusive and in 1996 Donelly broke up the band.

Donelly continued to perform and record, releasing four albums over the ten years following the breakup of Belly, as well as other songs over the Internet. In 2016 Belly announced a reunion after a 20-year hiatus, featuring Donelly, the Gormans, and Greenwood, with shows forthcoming in the United States and the United Kingdom as well as new music.

Not to be confused with the Nas/DMX vehicle movie of the same name.