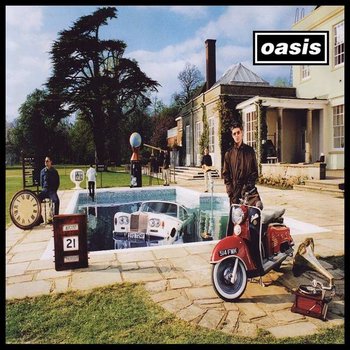 "All around the world, you gotta spread the word..."
"It's the sound of ... a bunch of guys, on coke, in the studio, not giving a fuck. There's no bass to it at all; I don't know what happened to that ... And all the songs are really long and all the lyrics are shit and for every millisecond Liam is not saying a word, there's a fuckin' guitar riff in there in a Wayne's World stylie."
—Noel Gallagher
Advertisement:

Be Here Now is the third studio album by the English rock band Oasis, released at the height of their fame on August 21, 1997note 26 August in the US and Canada.

Pressure was on the band after their breakthrough Definitely Maybe became an overnight sensation. They followed it up with the equally revered (What's the Story) Morning Glory?, successfully avoiding a Sophomore Slump. Music fans waited with bated breath as the band disappeared into the studio for six months.

What emerged was one of the most polarizing albums of The '90s. Clocking in at an incredible 75 minutes, Be Here Now is a sprawling, cocaine-fueled ode to the excess of Sex, Drugs and Rock & Roll. Receiving almost ridiculously positive reviews from critics upon its release, it spawned four singles, two of which ("D'You Know What I Mean?" and "All Around the World") topped the UK singles chart ("Stand by Me" stalled at #2 and "Don't Go Away" was illegible to chart due to the fact that it didn't have a physical release). It was and still is the fastest-selling album of all time in the UK, selling over 650,000 copies in the week after its release. Things were looking great, then massive sales dropped off after only being on the market for two weeks. By 1999, it was one of the most frequently donated albums to secondhand stores.